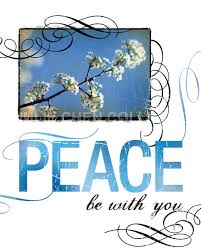 Imagine the first moment Jesus appears in a locked room, in the midst of his petrified disciples. What are his first words after dying a horrifying death, being betrayed by those closest to him and now rising from the dead? You would think it would be something like, “Wow! That was weird wasn’t it? Crazy, right?! Oh by the way, I am mad at you for leaving me in the Garden with that crazy mob. Hey, heaven is really cool, you’ll like it…if you get there and if you stop betraying me.”

Of course I am kidding, but it does seem ironic that the first words to the disciples at that moment is “Peace.” For the disciples, peace had long since vanished after the horror of that Thursday night in the garden and then with everything else that had happened…peace was the furthest thing from their mind. Yet Jesus says it twice seemingly to make a point.

Perhaps his point is, despite the chaos, violence, hatred, betrayal and death, with Jesus there is always peace. It seems that theoretically life with Christ should be an overall peaceful existence. Granted, there are unpeaceful things that happen in the world, but the proper posture for a Christian even in times of trouble is peace.

When we examine our lives and the lives of fellow Christians, is “peace” the word that comes to mind when describing Christianity these days? I would say that peace is often not a very obvious attribute among Christianity. Too often the opposite is true for Christians. Rather than a peaceful approach to life, anxiety, fear and contempt seem to be more the stance of too many Christians. Rather than the trusting and faith filled disciples of Jesus, Christian often are the angry ones, the anxious ones and the contemptuous ones. While these Christians convince themselves otherwise, choices, responses and actions involving violence, judging and accusing, seem more like the attitude of the crowd that condemned Jesus to death.

I like to point out the many times we pray for peace at Mass and how we pray to be delivered from all anxiety. There aren’t many prayers for vengeance, retribution and condemnation in our liturgies. Ideally Christians’ starting place is that of peace. Just as in that chaotic room, days after Jesus’ horrifying murder, peace is the starting point for Jesus’ disciples. From that little room where Jesus appeared to his disciples the Church began, it’s foundation is that of peace, and peace should be the foundation of our lives as Christians as well.   “Peace I leave with you, my peace is my gift to you.”