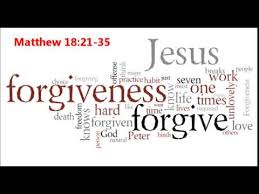 I think too often we confuse forgiving with forgetting. The old saying goes, “forgive and forget.” Well “forgive” yes, “forget” not so fast. Let’s put into context the question Peter asks in today’s Gospel, “how often must I forgive?” The Gospel story goes on from there. Jesus, goes on to explain the need to forgive 7×70 times, in other words, all the time.

Notice Peter does not ask, how often must I forget? Nor does Jesus explain anything about forgetting the injustice received, only forgiveness. To be a Christian means forgiving, it is one of the main tenants of Christianity. It is the intentional act of being open to a new and open relationship with the person who has sinned against you, even if they are uninterested or unwilling. It is a deliberate attempt to refuse to allow another person’s sin control us. It is an intentional act of being free of other peoples sinful attempts to control and hurt us.

If you recall the L.A. riots back in the 90’s, Reginald Denny, a truck driver was stopped in the middle of the intersection of Florence and Normandy Avenues in Los Angeles, the hot spot of the riots. He was dragged from his truck and beaten nearly to death by a group of men, in full view of helicopter cameras circling above. Denny survived the attack, but was left with severe lifelong health and mental consequences. Years later at the trial, Reginald Denny and his mother met his assailants and their mothers in the courtroom for the first time. Reginald and his mother, before any of the proceedings began went and offered their forgiveness to the assailants and their mothers. In an iconic photo, the two mothers were photographed in a tearful embrace of forgiveness and apology. Do you think Reginald Denny will ever forget that day at the intersection of Florence and Normandy? No, but through his forgiveness he gave way to the temptation of holding grudges, reparation, or revenge. Thus, through forgiveness he was set free.

Forgetting when someone sins against us, is naive, simplistic and practically impossible. Actually forgetting certain sins would be counterproductive and ridiculous. We learn from the sins we commit and the sins that are committed against us. Through forgiveness we learn limits and rational expectations. At the same time, though we do not forget, we open ourselves through forgiveness to new possibilities, to deeper and more valuable relationships.

While we would hate it, if the people we wronged would constantly remind us of our sinfulness, just as it would be wrong to continue to remind others of their sins to us, forgiveness causes us to focus away from the wrong and focus on the positive,and the improving.

We must forgive always, but we don’t forget the lessons learned, the reality of our human limitation, people are weak and make mistakes and we never forget that God forgives us as well.