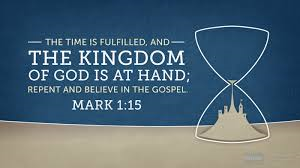 Today we hear from Mark’s Gospel at the beginning of Jesus’ ministry.  Jesus proclaims, “the Kingdom of God is at hand!”  If you were a first century Jew living in Palestine and heard someone say the Kingdom of God is at hand, you would imagine a couple of things that would happen when God’s Kingdom comes.  First, you would be looking around for God, Yahweh to be present in a specific and concrete way.  Second, it would be the end of the world, since the Kingdom of God would be at hand, thus ending the world in place of the kingdom.  You would also realize the Temple would be restored, the Twelve Tribes of Israel would be united and all that was hoped for would come to pass.

Of course, while some of what the Jews longed for was occurring and present, it certainly did not unfold as they envisioned it.  While it is true, God did visit his people in Jesus, the Jews certainly did not recognize that.  The Temple, Jesus himself, was restored in the resurrection and finally the Twelve Tribes of Israel were once again restored in the twelve Apostles. Basically, the Jews at the time would have considered Jesus crazy for proclaiming such a silly thing, pointing out just how wrong he was in their minds.  They were unable to see the things that they longed for were actually right in front of them.

Now let us not be too hard on the Jews, since we ourselves miss or fail to grasp or realize the Kingdom of God present right in front of us.  We may know it intellectually, but do we grasp and respond to it spiritually and emotionally?  There is proof that we do get it and a sign that we are responding in doing what Jesus proclaims in the face of God’s Kingdom at hand, repent and believe in the Good News.  Sounds too simple, right? But that is what we are to do.  Turn away from old sinful ways and turn toward Christ, while believing in his words.  We have many Christians who love to proclaim the Kingdom but seem to be unwilling to repent and believe in what the Good News really is, says and commands.