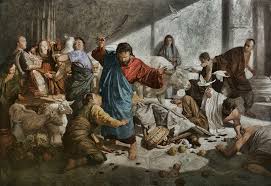 In today’s Gospel John goes into great detail in describing the manner in which Jesus drove out the money changers.  John feels it necessary to describe Jesus’ “weapon” as a whip out of cords. Then Jesus quotes Psalm 69 “Zeal for my Father’s house consumes me.”  Why does Jesus have so much zeal for a building, since he later makes the connection between the temple and his body knowing full well he will be killed and buried.  Let’s be clear, ultimately it is not the physical building that is the compelling factor for Jesus.  Zeal for his Father is the ultimate concern.  The building, the temple is a symbol, an important symbol for the Father.  Jesus is more perturbed about the irreverence shown to his Father by the irreverence shown to the temple of his house.

There is a shift going on here that is almost impossible for people of Jesus’ time to believe and grasp.  Now that God is physically present on earth in the presence of Jesus, the importance of the temple is significantly reduced.  The actual walking talking version of God in Jesus is so much more than the symbol of the Temple and the Holy of Holies.  The mere idea of this sends the elders of the people into a conniption.

For us, the presence of Jesus is felt, as he told us, in the least of God’s kingdom, in ourselves and in the Eucharist.  We need to be careful that we don’t fall into the same trap as the elders of the people back in the day.  As important as symbols and rituals are, they are not more important than the thing that they point to.  Our symbols and rituals point to Christ’s presence here on earth, that is our ultimate concern.