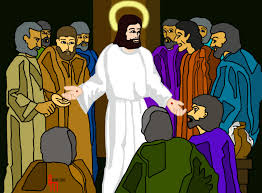 Maybe it was because of my impressionable demeanor or maybe too much Star Trek at the time, but I always was intrigued by part of Luke’s version of the post-resurrection story. Luke tells us, that after Jesus made his miraculous entrance into the locked room where the disciples were, he showed them the wounds of the crucifixion and proves to them that he is indeed a human, not a ghost or figment of their imagination, he asks for something to eat. (Apparently rising from the dead makes one really hungry!).  Then, what fascinated me was when Luke tells us, “Then he opened their minds to understand the Scriptures.”  All I could ever think of when I heard this as a child, was Mr. Spock on Star Trek.

If you were a fan of the show back then, you’d remember Spock performing a thing called “The Vulcan Mind Melt” where he would be able to enter into another alien and or human and read their minds while also communicating with them telepathically.  I always wondered if that is how Jesus “opened their minds to the scriptures.”  Luke doesn’t tell us anything about how Jesus did this.  It seems to imply that he opened their mind by means other than simple explanation.  It always seemed to me that there was something miraculous going on.

I always imagined how great it would be for Jesus to open my mind miraculously so that I could clearly understand scripture and in turn have great faith, but it apparently doesn’t work that way.  Or does it?  It seems like for our minds to be opened, we have to do it ourselves, but perhaps there is more going on here than we imagine.  Maybe Jesus is trying to open our minds, it’s just that we are getting in the way or somehow preventing our minds to be opened to him.  Perhaps, in that room where Jesus appeared to his disciples after the resurrection, his disciples were so totally open to what Jesus was trying to do for them, that they were able to receive Jesus’ revelation and allowed their own minds to be opened.

Perhaps, our prayer today could be one of openness, asking God to take all that inhibits and blocks Jesus from opening our minds to the scriptures.

Mike Kinter will be leading a discussion for our monthly grief support group.  Everyone is welcome.

“GRIEF is a journey, not a destination. If you have recently lost a loved one,

We will meet at 7:00 PM on the fourth Sunday of each month in the parish hall.”

Join us for our first meeting, Sunday, April 29 at 7pm