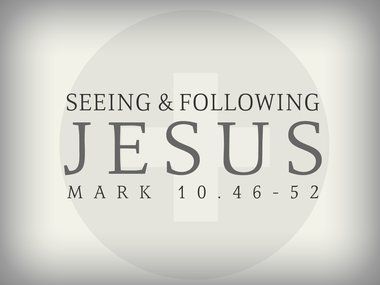 Today’s Gospel from Mark, features someone by the name of Bartimaeus. Mark, uncharacteristically  gives us a lot of information about who he is. He is blind and we are for some reason told who his father is, Timaeus.  Further examination of the story, tells us that he is poor, since he is begging, yet he seems to be alone without any friends or family present to him.

We can also deduce from the people’s reaction to his begging, that he is a familiar annoyance, perhaps someone whom they have had to deal with previously. He seems to be a person of deep faith, who has some knowledge of who Jesus is and who he claims to be. I don’t think we can call his faith Christian, at least at the beginning.  By his recognition of Jesus as the Son of David, it suggests a deep Jewish faith, but is at least open to the possibilities of Jesus being the one who had been promised. And he is certainly relentless in calling to Jesus as the crowd, annoyed with him, tries to verbally and perhaps even physically silence him.

We can also tell, that Bartimaeus is certainly not crippled, since “He threw aside his cloak, sprang up, and came to Jesus.” Perhaps we are inclined to think of the blind man as an elderly, even crippled somehow, but Mark does not describe his age. Does it change the story for you if you think of Bartimaeus as young man, maybe in his early 20’s?  At any rate, he is not shy and quiet bold in his introduction to Jesus.  He is not afraid to express himself and verbalize exactly what he needs.

Bartimaeus accepts the possibility that Jesus, the Son of David has the power to make him see. Although, his faith is presumably incomplete as he addresses Jesus as “Master” rather than the divine title of Lord, he has sufficient faith that Jesus, whoever he is, can heal him.

Jesus, does just that, but he makes it clear that it was Bartimaeus’ FAITH that healed him and not totally by Jesus alone. Jesus tells him “to go his way” and he “immediately received his sight.” The blind man, we are told now sees and follows Jesus. Jesus, is naturally not simply a great optometrist who can help people see.  He is more interested in healing spiritual blindness.  The blind man can know see both physically and spiritually.  He is able to “go his way” physically, but because he can see spiritually, he choices to follow Jesus.

The result is you can’t follow what you can’t see. When we see clearly we can choose whom and what to follow, consequently, when we cannot see, we can be fooled into following anyone or anything. How many examples can we see in the world and in ourselves, of how our undiagnosed blindness causes us to follow foolish people, trends and beliefs.  We need to constantly pray in faith as in the words of Bartimaeus, “Master, I want to see.”