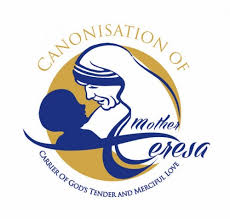 Mother Teresa will be canonized this weekend in Rome, thousands of people are expected to gather in the plaza of the Vatican. In 1995, I was working at St. Elizabeth’s Hospital in Boston when it was announced that Mother Teresa will be visiting the hospital. The logistics for the hospital and the city were extensive. There were security concerns and most of all traffic issues (as if Boston doesn’t have constant traffic issues anyway).

I was working in the chaplaincy program and they essentially told us to stay out of the way since it was going to be crazy and a media circus. I watched from a distance and saw the huge throng of reporters and officials make their way through the front lobby. While it was clear that there was someone important at the center of that throng, it was impossible to see who it was. Of course all of Mother Teresa’s 5’ height was swallowed up by the mob, yet this small wisp of a woman was clearly in control of the entourage.

She went to the maternity ward to visit moms and dads and their newborns. Later on the news I saw an interview with one of the fathers, a huge hulking, biker type fellow with long hair, beard, mustache and tattoos. He said he really wasn’t expecting much from the visit of Mother Teresa, and certainly wasn’t expecting her to talk with him. While choking back emotion he admitted, “All she did was pat my face and say ‘Be a good father.’” It was obvious this simple gesture and simple words from a simple woman had a profound effect on this man, something I suspect will have life changing results even now. These are the simple things saintly people do. Little kind acts that cost nothing.

There was a slight media uproar when a biography of Mother Teresa was published several years ago. In the book, were excerpts from her diary which expressed doubt and many dark nights of the soul. Some pointed to these admissions of doubt claiming Mother Teresa was not as saintly as everyone believed. As if having doubts and questions, somehow disqualifies someone of being a faithful disciple. Mother Teresa was not a super hero, nor did she ever claim to be anything but a disciple of Christ just trying to show love to the least of God’s Kingdom and to do God’s will. We often tend to make our saints out to be almost super human as if they were immune from doubt and difficulties in faith. We tend to take their humanity away from them, when it is their humanity and their struggles that make them a saint.

For me, it is precisely this idea of someone being more like me, sharing experiences of doubt and weakness makes them more inspirational. The fact that they struggle like me and manage to overcome those struggles is what would lead me to follow their example far more than a legendary super human who had everything figured out and never struggled at all. I can’t be like that so their example does not resonate with me.

So, we have a new member to the Catholic Hall of Fame, Saint Mother Teresa. Wouldn’t it be great if there was an induction ceremony in heaven that we could all watch and listen to Mother Teresa’s acceptance speech.