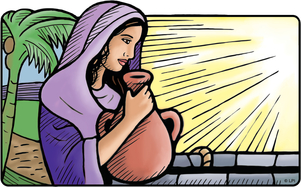 Today’s Gospel tells the story of Jesus’ encounter with the Samaritan woman at “Jacob’s Well.” It is interesting how detailed John’s account of this story is.

“Samaria called Sychar, near the plot of land that Jacob had given to his son Joseph. Jacob’s well was there.”

You can go to the presumed spot of this scene and see the well many people believe to be the site of Jacob’s Well. There is indeed, a well there surrounded by a Greek Orthodox Monastery that guards it. The well, located near the ancient city of Nablus, is certainly a point of contention through the years. The site is of spiritual significance for both Jews, Samaritans and Christians. Since the Israeli Occupation of the West Bank, there have been instances of violence.

In November of 1979 a custodian of the church, Archimandrite Philoumenos, was found dead at the hands of a mentally disturbed Israeli from Tel Aviv. After his death, Philoumenos was declared a holy martyr of the Eastern Orthodox Church in 2009. He is buried in the church he tried to protect.

When you go to the well, you are required to go down a set of stairs behind the altar, down into a cave-like area. Shockingly, there is a fully stocked gift shop at the bottom of the stairs. After more than 1500 years of existence the well has been destroyed, neglected, and destroyed again, largely due to natural causes most recently destroyed in 1927 by the Jericho Earthquake.

Today the well is rebuilt with stone and an old hoist and bucket that can be lowered into the very deep well. Our guide suggested we throw a coin into the well in order to get an idea of how deep the well is based on how long it took before you heard the splash.

The church was named St. Photini, the legendary name of the woman at the well with Jesus from John’s Gospel. John tells us that the scene is in the city of Sychar. Archeologists have investigated the area and have found evidence of the old city and other ancient cities in the area.

There is a sculpture of this Gospel story on the Notre Dame campus depicting Jesus sitting alone at a well, seemingly inviting someone to come, sit and talk with him. If we sat down with Jesus at the well, what would you talk about?