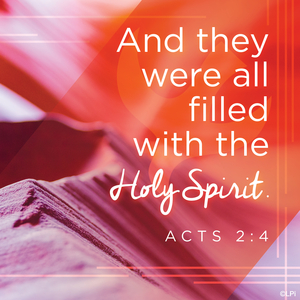 Without harping too much about the phrase “the new
normal,” to me, the reading from Acts today, describing the
Pentecost scene, begs for another analogy with today’s
health crisis.

As I have mentioned during Holy Week and throughout this
Easter Season, beginning Good Friday, the disciples were on
an emotional roller coaster. The first of the new normal was
their being forced to deal with life, after Jesus was killed and
the feeling that they would be next. What happened to the
confidence, the pride, the trust, the faith that came from
following Jesus? The new normal for them at that moment,
was living in fear and insecurity.

Then, Jesus seemingly casually appears to them in the
locked room. What?! Once their blood pressure adjusted
and their hearts ceased palpitating, they then had another
new normal to adjust to. Now the new normal involved a
resurrected Jesus who had been dead and is now alive. The
confidence returned, the sullied faith restored…now what?
The new normal involved figuring out what it all means, not
just for them but for the world and even time itself.

Those were heady times for the disciples. They must have
thought that they were privy to knowledge only they had or
“understood.” On top of that, they were with the Messiah,
the Son of God, who had just defeated sin and death….what
could be better?

Just as it was all going so well, Jesus tells them he must
ascend to heaven, in effect, leaving them alone again. “How
rude!,” they must have thought. Just when things were going
so well, he had to leave. Now what? So an even newer
normal confronts them. Life without Jesus. This normal may
not be as bad, they may have thought. At least we know he
really was the Son of God and they could believe more surely
the things he taught to them. After all he did teach them
many things and it wasn’t that they were going to be left
unarmed. They had much more confidence and faith in him,
God and themselves. So he left them and they were once
again sitting around in a room, staring at each other….”now
what?”

Today, we celebrate the next new normal. By the way, it is
not the new normal just for the disciples, but it continues to
be the normal for us. The new normal for the disciples
involved the Holy Spirit…..new confidence, certitude, almost
arrogance in a faith that was fearless in facing the future.
They liked this new normal. As bad as it all seemed not that
long ago, now seemed practically perfect. Despite
everything, they were inspired to figure it all out. They
couldn’t wait to build up Jesus’ Church.

This is the normal we are still in. A normal confident and
faith filled building up Christ’s body the Church. 2000 years
later, it hasn’t turned out as bad as it might have seemed on
Good Friday night. Despite all the mistakes and evolving, the
new normal produced the Church in which we are in now.

The current normal and all the new normal’s ahead, will turn
out the same way, better than before. How can we be sure?
Well, with faith and confidence in the continued power of the
Holy Spirit, we can do anything.