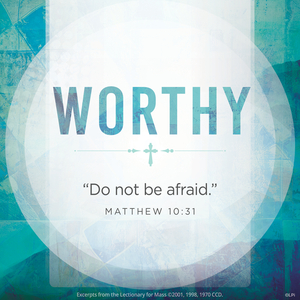 It is amazing how often we have to relearn the lesson that Jesus teaches us in today’s Gospel, “Nothing is concealed that will not be revealed, nor secret that will not be known.” How much energy do we spend covering our tracks over things we want to hide from others. Mark Twain said, “We wouldn’t have so much to remember if we didn’t lie so much.”

We hear the word “transparency” bantered about, and it seems that there is always a call for GREATER transparency. Why do we have to keep reminding ourselves and each other to be transparent? Granted there are things that are simply nobody else’s business, but it seems that most of the time we try to keep hidden, things we are trying to get away with or things that we assume will cast us in bad light.

Jesus’ message and Mark Twain’s quote, is to remind us that if we are upfront and transparent about ourselves, even our flaws and past mistakes and sins, the less anxiety and effort we need to endure covering everything up. God sees everything anyway.

I watched a “30 for 30” program about Lance Armstrong. He became one of the most famous, celebrated and admired athletes in the world, winning six Tour de France championships. It was later revealed that he was using performance enhancing drugs that were illegal and disqualifying. He was stripped of all his awards and he became a disgrace and disappointment to millions. On this program Lance Armstrong came clean about his drug usage and spoke openly about why and how he cheated. Though it was a humiliating admission, at the end of the program he expressed his sorrow and regret. He talked about still suffering from the consequences of his doping, but also admitted how much freer and unburdened he felt, finally admitting his wrongs and not having to worry about hiding everything.

As Lance Armstrong found out the hard way, it is difficult to hide your wrong doing and how much energy we have to spend concealing it. Jesus’ message is not only practical but spiritually, useless, since God sees all. Not only is it easier to live a transparent life, being found out or caught lying can be humiliating in the worst ways. It’s going to be found out sooner or later anyway.

Mostly, Jesus asks us not to hide our faith. It needs to be proclaimed. Of course God knows how sincere we are in our faith life. Remember, “What I say to you in the darkness, speak in the light; what you hear whispered, proclaim on the housetops.”