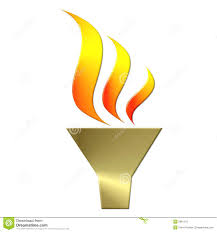 It is interesting as we watch the 2016 Rio Olympics unfold, particularly as we watch the opening ceremony and all of the well known Olympic symbols, how familiar these symbols are to Catholicism. Doesn’t the Olympic Flame bear a striking similarity to the Easter Candle?  Could the doves that are released during the opening ceremonies representing peace have any connection with the dove of the Holy Spirit?  What about all the rituals, the parade of athletes, the lighting of the flame?  The ritual words of the Opening of the games should all feel very familiar to Catholics.

There is a reason for all of the similarities of the Olympics with Catholicism.  Baron Pierre de Coubertin is credited with the founding of the Modern Olympics in 1894.  Coubertin, born in Paris, was raised in a Catholic aristocratic family and later was educated in Jesuit schools.  His Catholicism and Jesuit training combined with his love of sports, no doubt contributed to his vision and development of the symbols for the Modern Olympic Games he helped revive.

His vision of international competition began to materialize in the late 1850’s after he had experienced the Meeting of the Olympian Class, a local competition taking place in England, in and around Liverpool. Coubertin, along with several of the organizers of the Olympian Class competition, began to dream of a much bigger competition involving athletes from around the world.  After years of work, organizing and advocating for a revival of the ancient Olympic Games to the Modern Games, Coubertin founded the International Olympic Committee and in 1896 the first Modern Olympics was held in Athens, Greece.  14 nations and 241 athletes competed in 43 events at the Athens Olympics.  Four years later, in 1900, the Games were held in Paris.  In 1904 the Olympics came to the United States for the first time, held at the World’s Fair in St Louis.  Of the 650 athletes that participated, 580 were from the United States.  You can still run the Olympic Marathon route today as part of the current St. Louis Marathon….it is hilly!

As you watch the Rio Olympics unfold, perhaps you can appreciate the rich Olympic symbolism and the Catholic influences on those great and historic rituals.