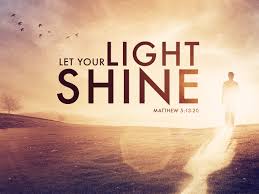 There is a light known in the theater world called “the ghost light.”  It is a single light bulb mounted on a simple stand about five feet tall, usually made of wood.  The light is placed right in the middle of the stage near the edge, down stage.  It is left on at all times when the stage is dark.  If you were to walk into an empty theater after hours, anywhere in the world, the only light on would be the ghost light shining from center stage.

It gradually became known as a ghost light because some of the superstitious tales that began to be associated with it.  Tales of the light moving freely in the dark by itself or being carried around by ghosts were told.  Some began to believe that the ghost light is necessary for when ghosts perform their shows at night. Some theaters have seats permanently left open at night so the ghosts can have a seat when they are present.

It obviously has practical origins, namely to keep people from falling into the orchestra pit when walking into a darkened theater.  Besides being called a ghost light, it is also known as the “equity light” since it was mandated by the Actors Equity Association for safety reasons.

I always think of the ghost light when I hear today’s gospel from Matthew.  The ghost light stands in the middle of the stage for all to see.  It would be dumb to place it anywhere else, such as off stage or behind a curtain.  It is there for protection, to illuminate our surroundings, to guide us.  Much like the light of Christ.  Christ’s light is set in the center of the world, our world, for all to see. Like the ghost light, it is there to guide us, to direct us and to keep us safe.

Today Christ challenges us to radiate that same light…to reflect Christ’s light in our world.  We are to stand tall and make sure our light can be seen for all, to direct us and guide us toward Christ who helps us, protects us and loves us.