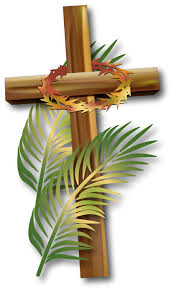 Perhaps looking from the “Lions Gate”  across the Kidron Valley toward the Mt. of Olives, you could imagine the scene in today’s Gospel. You would likely see a small group of people following a man riding on a donkey. As the group made its way down the southeastern slope of the valley, it began to grow in size and commotion. As the growing procession began to ascend the near slope of the valley, the commotion and chants of the people were growing louder, more decipherable and more emotional the closer it all got to the Golden Gate on the eastern side of the city.

By the time the crowd proceeding and following the man on the donkey passed through the Golden Gate and now passing near the temple, the procession was more like a rabble than anything organized. People were chanting and praising the man on the donkey, calling him king. The growing fervor and emotion of the crowd bordered on intoxication as they almost deliriously waved palms cut from nearby trees, a traditional acknowledgment of royalty. The commotion would have likely effected the whole city, it would have been impossible to ignore.

By now, everyone knew who this man was and understood why and how he incited such a reaction from most in the city. He dismounted and ascended the steps of the temple to enter. This wasn’t the first time he walked up these steps, but certainly this time his visit to the temple had more purpose and deliberateness.

A small group of religious leaders gathered together watching this man stroll across the court from above. Rage and contempt building, “who does this man think he is? He has convinced the people he is a king and does nothing to stop it!”

Not only would this be a challenge to Herod, the current King of the Jews, but perhaps, even a growing security risk, something bound to get the attention of Pilate, whose main reason for being in Jerusalem, was to keep the peace during Passover.

Soon the commotion simmered down, but the risk and controversy did not. The following days would be dominated by accusations and threats, culminating arrest, a comical hearing and trial and death. The church leaders were successful in convincing the crowd of the ridiculous, trumped up charges against the man on the donkey, the crowd was putty in their hands.

By the end of the Sabbath, they had convinced the crowd and Pilate that the man on the donkey was a phony and a criminal, someone so horrible that he deserved death. Everyone went back to their former routines and lifestyle. It was exciting while it lasted, but that man got his and now, no longer a threat. At least that’s what they thought.