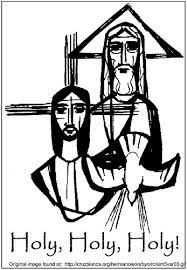 This weekend’s readings send shivers up every clergy-person’s spine, regardless of denomination or rank. Trinity Sunday. What is anyone supposed to say about the Trinity? It is a concept that has caused gallons of ink to be spilled trying to explain it. It is a topic that only the stout hearted will attempt to dwell on.

When in second grade, we pressed Sr. Jaunita for a more satisfying answer. We argued as seven year olds, “Sister, if we insist on one true God and further, claim to believe in the same God as the Jews, ‘hear oh Israel, the Lord your God is one!’ Sister, with all due respect, how can there be three distinct persons as God.” We were a very bright class. Even when we pressed Sister for an answer, she resorted to the standard answer to all Catholic questions…”It’s a mystery…”

“It’s a mystery” is the answer we tend to hear a lot and certainly Sr. Jaunita would only be the first of many others to answer questions about the Trinity as “a mystery.” Others have attempted to explain it using the symbols of light, “light from light; true God from true God”-the Nicene Creed. The idea put forward by the Church Fathers of the fourth century was that God the Father was the source of light which shines through the Son and Spirit, but to look at it, there appears to be one light. Other theologians tried to explain the trinity using words like “spiration”’ “pericoisisis” or “circumseseian,” all attempting to explain three persons in one God. I prefer St. Patrick’s three leaf clover as the most understandable explanation.

The question is, why is there a problem to begin with? Well, we have always claimed to be Judaeo-Christian and Jesus claiming to be the Son of the Father, and further he says, “the Father and I are one.” This appeared to the Jews of the time as blasphemy because Jesus claimed to be god also, thus making two gods and certainly not an orthodox Jewish belief. But we insisted that we are born of the same Jewish God Yahweh. To make it even more complicated, Jesus says things like he will send the Holy Spirit and he will speak the Word of God to you. Now there is three, yet we insist we believe in the one true God of our ancestors.

Trying to explain something like the Trinity is impossible to anyone outside of Christianity. I think you have to see it all specifically from a Christian view as non-christian theologians would start from completely different ideas. In other words, something like the Trinity, is a matter of faith, and the believer accepts the attempts to explain the unexplainable and doesn’t spend much energy trying to explain it to one’s self.

I think Sr. Juanita was more right than she probably knew…”it’s just a mystery.”