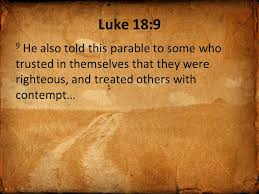 We are given two examples of people in Jesus’ parable in the Gospel today. The first, an obvious self-righteous person who measures himself against the perceived weaknesses, faults and the sins of the other. At the same time he is clearly satisfied with himself and assumes an awful lot about how God sees him. The second, someone obviously well aware of his weaknesses, faults, sinfulness, while acknowledging his need for God’s grace, forgiveness and love.

God’s judgment is swift and final, forgiving and elevating the humble and honest person and casting down the arrogant, the selfish and self righteous one. In a negative way Jesus shows us what our attitude toward life should be, instead of looking down, judging and condemning a life, we are to see ourselves as equal, co-sinners, having similar weaknesses and limitations, but above all equally needing God’s love and forgiveness.

Seeing each other as sinners and on the same level is what humility is and it is how God sees us. The moment we move toward becoming like the Pharisee tending to look down at a life, any life, we are becoming the hypocrite that Jesus condemns. Being pro-life at it’s core is seeing the sinner as a fellow sinner who deserves God’s grace the same as anyone else, no more and no less.

As Jesus demonstrated throughout his ministry, being pro-life starts with how we treat our neighbor and how we treat our enemy. Think of the most difficult person or seemingly least deserving of God’s love, and that is the starting point of being pro-life. Being pro-that person’s life is counter-intuitive and difficult, but it is the essence of what a follower of Jesus’ attitude must be. Imagine Jesus hanging on the cross looking down at those who were responsible for his execution and even as he hung there, continued their mocking. Instead of condemning them, damning them or writing them off, he forgives them. Even the guilty criminal beside him he forgives. Innocent or sinful, Jesus sees the dignity in each life and offers his love and forgiveness to each person one at a time.

To be pro-life is to consistently be pro-every life, guilty or innocent, born or unborn, as Jesus demonstrated. As Cardinal Bernadine called it in his “Seamless Garment” document, having a consistent life ethic. Jesus, did not pick and choose whose life is worthy and whose wasn’t. He didn’t simply recognize the dignity in those close to him, but saw the dignity in his enemy and the sinful.

It is never easy to be pro-life because it involves being pro-the seemingly least deserving life, but that is the model Jesus gave us. Being humble, having an honest assessment of how God sees us is the starting point, seeing others as God sees them is the next step.