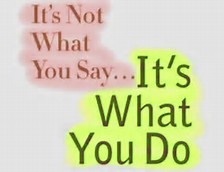 It seems as though there are more examples of the second son, from Jesus’ “two sons” parable in today’s Gospel. How many of us are quick to say “yes, I will do the work of the Lord,” but have trouble following through? How many examples are there in the world of those who claim to be willing to go out into the Lord’s field, in order to impress others or advance whatever their desires are at that given moment, but they either forget or really have no intention to even go near the vineyard, let alone get their hands dirty.

The second son seems to get away with getting what he wants, a) He sounds like a true loyal and faithful son, b) he doesn’t have to argue with his father and c) gets what he wants, leisure time and no work. There are many who love to use this tactic to get what they want. How many examples are there of those, who when asked about their faith, they, like the second son, quickly respond, “yes sir,” in order to look good, avoid explaining themselves and not have to mess with the work of faith when they leave the scene? Careers are built on this method and it seems like it works, because so many get away with it. There seems to be very little desire to go out to the vineyard to see if these so called, reliable and faith filled children actually make it to the field let alone do anything if they ever get there. I mean, after all, they are so forceful, clear and confident when they announce their desire to do the work of the Father. With such boldness, who would doubt them, or scrutinize their work?

Of course, there’s that annoying first son, who complains about having to work, yet drags himself to do exactly what his father asks. There are not as many of these sons around and when we encounter them, often we wish they would just be quiet and go away. We rarely follow up with them either, to see just how much work they do in the vineyard. We miss out or ignore all the work these, sometimes annoying ones really do for the Father. We are too often drawn to those who loudly, boldly and confidently claim to be willing to go into the Father’s vineyard and work, but never do. We are less enamored with the less polished, verbose and cocky others, who really do work for the Father   Sometimes it is the shrill, annoying and angry voices who really are the loyal and faithful ones, who actually do the work of the Lord rather than the loud and declarative ones.