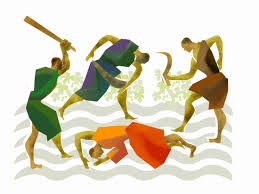 Today’s Gospel is all about lack of trust, greed and selfishness, even when it comes to religion and faith.  It seems as though anything which can be had will be coveted and anything coveted can be stolen.  It seems as though human nature leads us to the temptation of taking something as our own, despite the price or the morality of the taking.

Here we have a vineyard which someone owns and all he wants to do is take a vacation.   Surely he can trust his foreman and hired employees to watch over things until he returns.  Of course we are wrong to assume their trustworthiness and their loyalty.  They take possession of the vineyard and systematically eliminate anything or anyone who gets in their way, including the landowner’s son.

Clearly this parable is designed to be about Jesus, the world in which he came to and its rejection.  It seems as though even when it comes to heavenly and spiritual things, selfishness and greed can take over and the desire to possess something as one’s very own is a very real temptation.

We might comfort ourselves by saying things like, “how could THEY be so selfish and cruel?” Or “I would never have been one of THOSE people.” Or “I would certainly not be tempted to seize God’s own vineyard.”  I don’t think Jesus’ parables are designed or said with too narrow of a focus.  I don’t think we were directed solely on one group of people in a particular time.  This leads to the question, “how am I like those tenants of the vineyard who seized the vineyard and were so cruel?”

I think anytime we find ourselves feeling as though we are in control of not only our own faith but everyone else we risk being exactly like those evil tenants.  When we assume a position of knowing all and judging all, we are in effect taking over for God the landowner, and running things ourselves There is an arrogance that people are tempted to assume when we feel like we can judge and run God’s vineyard in the place of him.  We may convince ourselves that we truly know the will of God and we truly know how people should and shouldn’t act.  In a sense we become little gods, rulers of the vineyard.  We run the risk of acting like God doesn’t know how to do it or we know how to do it better, so we take over and run things for him.