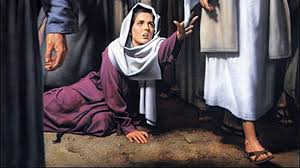 This poor woman. She had so many things working against her in today’s Gospel. In first century Palestine women were second class citizens, and certainly did not enjoy the simple rights and privileges that men enjoyed. In addition to being a woman, being divorced would knock you down even more in social standings and being a widow (without a male advocate) made things all the more difficult.

In situations as in today’s Gospel, a woman making bold and deliberate moves toward any male much less one seen as in a position of power like a rabbi, would be seen as an affront to the social order and would the woman be punished if not ostracized? Watching this scene unfold, you would likely be shocked at the rudeness and vulgarity of this woman approaching Jesus.

Her financial situation did not help either. Her poverty was another reason for her to be expected to take her place to the rear of society. The poor were certainly not tolerated in social settings among the more affluent members of that culture. A poor woman would be expected to remain out of sight and never cause a scene or attract attention.

Perhaps the worst thing this woman had going against her is her illness and the fact that her condition involved the flow of blood. If you remember in the 1980’s-90’s, when the AIDS epidemic hit, people assumed that being near the people who suffered from AIDS, they would contract the illness just by being near them. There was also the opinion that those who had AIDS were clearly sinful people. In 1983, 13 year old Ryan White contracted AIDS and was kicked out of his school for fear of others contracting his illness, but even more, this was influence by ignorance and the questioning of 13 year old Ryan’s sexual promiscuity or his parents. This same shunning and exclusion was practiced in first century Palestine toward anyone with open wounds, like leprosy, or anyone bleeding etc., like this woman.

Despite all these reasons to shun this woman, despite her being seen as a sinner, a threat, a freeloader, Jesus turned toward her, treated her with compassion, openness and kindness. This is how Jesus treated all people regardless of their social standing, whether or not they were legal or illegal, immigrant or sinner. This is how Jesus’ disciples are expected to treat people as well. Certainly Jesus would be appalled at the way our culture treats the least of our world. While many claim to be pro life, apparently for way too many, there is some life that is better or more valuable than others. To be a disciple of Christ one must be pro all life, starting with the ones in our midst. Like Jesus, regardless of the social standing of a person, we are to turn toward them and treat them with the same Christ-like compassion, kindness and respect.