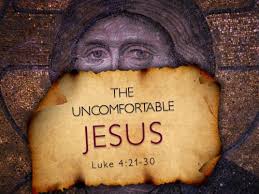 In today’s Gospel, Jesus is in his own synagogue in Nazareth, reads from the scroll of Isaiah that foreshadows his coming into the world as the Messiah. He tells his hometown friends and family members, that the scripture he has just read, “is fulfilled in their hearing.”  He then goes on to predict the reaction to his announcement and predicts that people will react sarcastically and make the belittling phrase, “physician heal thyself.”  Jesus is predicting that many will not believe his claims of being the Messiah and the Son of God when he cannot bring himself down from the cross. It is a similar insult such as  “He saved others, why can’t he save himself.”

We hear this type of sarcasm all the time, as people try to belittle or deny a belief, theory or opinion.  “They can put a man on the moon, but they can’t..(fill in the blank).”  Another similar way of discounting a position, theory or claim is by declaring something like, “I rode in the front seat of our car and in the back of a pickup all through childhood and I survived.”  The intention is to discredit or mock seatbelt and safety regulations of today’s vehicles.  Statements like this are called “False Equivalencies.” The false argument centers on “since it didn’t happen to me so it shouldn’t happen to others. In believing this theory, one can feel comfortable believing the position, claim or theory is illegitimate.”

False equivalencies are a way of arguing against something new, threatening or challenging. It is way of sounding certain or claiming the moral high ground over and about something without much information to defend one’s position, except one’s own limited experience. Usually it involves a knew way of thinking, acting and or living that involves change or reevaluation.

In the case of the people in Jesus’ time, they are threatened or humored by Jesus’ claims of being the Messiah, the Son of God and the “Amani Doctor,”- the soul doctor.

“Who does this Jesus think he is? Sure he cured other people but he can’t bring himself down off that cross.”

Jesus did not fit with many of their preconceived ideas and notions of who the Messiah would be and so, rather than considering the reality of Jesus’ claims, they settle for their own limited knowledge and experience.  They felt good about pointing out that a good physician can and should heal themselves. In other words, since Jesus can’t heal himself on the cross, like any good doctor, he is not the Messiah or Son of God.

How often do we retreat to our own comfortable way of thinking when we are challenged or threatened to think differently or outside the box. This is particularly important, when we are challenged by God, to look at things differently and change for the better.  In a way when we decline to be influenced or molded by God to his will, we are making ourselves our own little god.