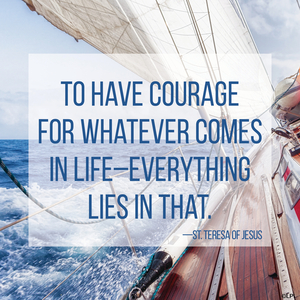 Known to her family as Teresa de Cepeda y Ahumada, she became the reformer of Carmel, mother of the Discalced Carmelite nuns and friars, “spiritual mother” (as is engraved under her statue in the Vatican Basilica), patron of Catholic writers (from 1965) and Doctor of the Church (1970), the first woman with Saint Catherine of Siena to ever receive this last title.

She was born at Avila in Castile, Spain, on 28th March 1515 and died in Alba de Tormes, near Salamanca, on 4th October 1582 (a correction due to the Gregorian reform of the calendar that year, as the following day was officially 15th October). She was beatified in 1614, canonised in 1622 and her feast day occurs on 15th October.

Her life needs to be understood in the light of the plan which God had for her, with the great desires experienced in her heart, with the mysterious illness to which she was subject in her youth (and with the ill health from which she suffered throughout her life), and with the “resistance” to divine grace for which she blamed herself more than she should has. Running away from home, she entered the Carmel of the Incarnation in Avila on 2nd November 1535. As a result, partly of the prevailing conditions in the community and partly from her own spiritual difficulties, she had to struggle before arriving at what she called her conversion at the age of 39. But, benefitting from various spiritual directors, she then began to make great strides towards perfection.

In 1560, the idea first emerged of a new Carmel, where the Rule could be followed more closely, and this was realized two years later when the monastery of St. Joseph was founded without any endowments and “following the Primitive Rule”: a phrase that needs to be clearly understood because both then and later it was a notion which was more nostalgic and “heroic” than practical. Five years later Teresa obtained from the Prior General of the Order, John Baptist Rossi, then visiting Spain, permission to increase the number of monasteries and a licence to found two communities of contemplative Carmelite friars (later to be called Discalced) who would be the spiritual counterparts of the nuns and, as such, able to help them. At the death of Saint Teresa, there were 17 monasteries of nuns in the Reform, and the communities of friars also quickly outstripped the original number, some founded with permission from the Prior General Rossi but others, especially those in Andalusia, established against his will, relying on the approval of the apostolic visitators, the Dominican Vargas and the young Discalced Carmelite Jerome Gracian (a close spiritual companion of Teresa, for whom she vowed to do whatever he asked her, as long as it was not contrary to God’s law).

There followed a series of unedifying quarrels, made worse by the interference of the civil authorities and other outsiders, until in 1581, the Discalced were formed into a separate Province. Saint Teresa was then able to write, “Now all of us, Discalced and Calced, are at peace and nothing can hinder us from serving the Lord”.

Saint Teresa is among the most important figures of all time for Catholic spirituality. Her works – especially the four best known (The Life, The Way of Perfection, The Mansions and The Foundations) – together with her more historical works, contain a doctrine which encompasses the whole of the spiritual life, from the first steps right up to intimacy with God at the centre of the Interior Castle. Her Letters show her occupied with a great variety of everyday problems. Her doctrine on the unity of the soul with God (a doctrine which was intimately lived by her) follows the Carmelite tradition which had preceded her and to which she herself contributed in such a notable way, enriching it as well as passing the tradition on, not only to her spiritual sons and daughters, but also to the whole Church which she served so unsparingly. When she was dying, her one joy was to be able to affirm that “I die a daughter of the Church”. https://www.ocarm.org/en/content/liturgy/st-teresa-jesus-virgin-and-doctor-church-feast